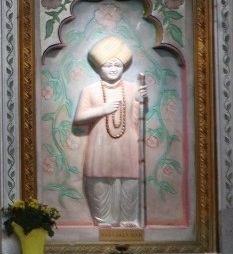 Jalaram Bapa was born in Virpur, Rajkot district, Gujarat, India in 1799, on the seventh day of the Kartika month. His father was Pradhan Thakkar and his mother was Rajbai Thakkar who belonged to Lohana clan. He was a devotee of the Hindu god Rama. Jalaram Bapa was however not willing to live a householder’s life and continued to take care of his father’s business. He was mostly engaged in serving pilgrims, sadhus and saints. He separated himself from his father’s business and his uncle Valjibhai asked Jalaram Bapa and his wife Virbai to stay in his house. At the age of sixteen, in 1816, Jalaram married Virbai, the daughter of Pragjibhai Thakkar (Somaiya) of Atkot. However, he was inclined to completely withdraw from materialistic life and become an ascetic, Virbai proved to be an asset to him in his works of feeding poor and needy. At the age of 18, soon after returning from pilgrimage to Hindu holy places, Jalaram Bapa became the disciple of Bhoja Bhagat of Fatehpur, who accepted him as his disciple. Jalaram was given the Guru Mantra and japa mala in the name of Rama by his Guru Bhojalram. With blessings of his guru, he started “Sadavrat”, a feeding center, a place where all sadhus and saints as well as the needy could have food any time. One day, a sadhu who came to his house gave him a deity of Lord Rama, forecasting that Hanuman, the monkey-god and devotee of Rama, would follow soon. Jalaram Bapa installed Rama as his family deity and after a few days, a deity of Hanuman appeared out of earth, on its own. The deity of Rama’s consort Sita and his brother Lakshmana also appeared. Due to a miracle the container in the house of Jalaram, where grains were stored, became inexhaustible. Later other devotees and village folk joined him in his works of human welfare. Jalaram bapa’s fame spread as a divine incarnation. Whoever came to Virpur, whether Hindu or Muslim irrespective of caste, creed and religion were fed by Jalaram. This tradition of feeding people continues to this day in Virpur. It is believed that once a tailor named Haraji, who was suffering from severe stomach-ache came to him to get himself cured. Jalaram Bapa prayed to God and Haraji was cured. He fell at Jalaram Bapa’s feet and addressed him as Bapa. Since then he was known as Jalaram Bapa.[3] Soon his fame spread and people came to him to get rid of diseases and problems. Jalaram Bapa would pray for them in the name of Rama and miracles happened. Both Hindus and Muslims became his disciples. In 1822, Jamal, son of a rich Muslim merchant fell ill and doctors gave up all hope. At that point of time, Haraji, told Jamal of his experience (parcha). Jamal, prayed from his house, that if his son is cured of the disease, he would give 40 maunds of grain to Jalaram Bapa for sadavrat. His son recovered and Jamal visited house of Jalaram Bapa with cart load of grains and called him Jalla so Allah! It is said that at one time, God in the guise of an old saint told Jalaram to send Virbai to serve him. Jalaram consulted her and with her consent, sent her with the saint. But after walking some miles and reaching a nearby forest, the saint asked Virbai to wait for him. She waited but saint did not return. Instead, she heard an Akashwani stating that it was only to test the hospitality of the couple. Before the saint disappeared, he left a Danda [staff] and Jholi [cloth bag], with Virbai. Virbai returned home to Jalaram, as instructed by the celestial voice with Danda & Jholi. This Danda and Jholi are still at Virpur and kept on display in a glass enclosure. Jalaram Bapa passed away on February 23, 1881 at the age of 81. Some of his devout followers believe that even after his death, Jalaram Bapa would make unusual miracles happen. One of these being that he fed one of his sisters water, a few hours after he breathed his last.