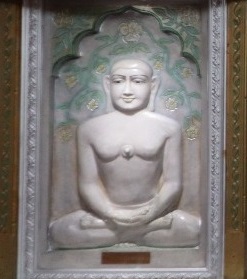 Lord Mahavir also known as Vardhamana, was the 24th Tirthankara of Jainism. He was the spiritual successor of the 23rd Tirthankara Parshvanatha. Lord Mahavira was born in the early part of the 6th century BCE into a royal Kshatriya Jain family in ancient India. His mother’s name was Trishala and his father’s name was Siddhartha. They were lay devotees of Parshvanatha. Mahavira abandoned all worldly possessions at the age of about 30 and left home in pursuit of spiritual awakening, becoming an ascetic. Mahavira practiced intense meditation and severe austerities for twelve and a half years, after which he attained Kevala Jnana (omniscience). He preached for 30 years and attained Moksha (liberation) in the 6th century BCE, although the year varies by sect. [ Courtesy Wikipedia]