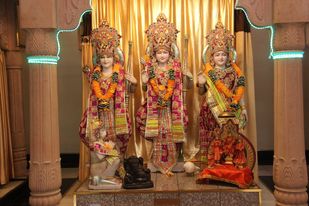 Shri Ram is the seventh incarnation of Bhagwaan Vishnu (Preserver and Protector of the entire Cosmos) born in Treta Yug (Silver Age) on Earth. The Devi-Devatas needed Bhagwaan Vishnu to be reborn in the Avatar of a Manushya (Human being) in order to slay demon King Raavan of Sri Lanka who had created havoc in all the 3 World (Earth, Heaven and Netherworld) and was undefeated by anyone as he had received a boon from Lord Brahma that no Animal, Bird, Weapon, Devi, Devata, Gandharva, Yaksha, Rishi, Muni, Naga, Bhoot, Pisaach nor any 5 elements of Nature can kill him. Shri Ram killed Raavan in a fierce battle with him with the help of his younger brother Shri Laxman (An incarnation of Adisesha) and Shri Hanuman, Sugreev and Vaanar Sena after Raavan had forcibly kidnapped his Shri Ram’s wife Sitaji from their house in the forests and held her captive in his palace in Sri Lanka. Prabhu Sri Ram is also called as ‘Maryada Purshottam’ (The Ideal Man who always followed the Righteous and Moral Code of Ethics and conduct) who set a fine example of how a person should lead his/her life and the strong values and character he/she should possess while remaining unflinching in his attributes even in times of great difficulty or adversity.Shri Ram is the perfect epitome of ‘Truth’,’Valour’,’Justice’, ‘Devotion’, ‘Love’ & ‘Sacrifice’, ‘Strength’ and ‘Morality’. He is the Ideal Son, Brother, Husband, Father, Student, Friend and most importantly an Ideal King of his subjects and Kingdom.

Mata Sita is an incarnation Of Devi Mahalaxmi the Divine consort of Bhagwaan Vishnu and was born on Earth as the daughter of Bhudevi and was later adopted by King Janak of Mithila. She is the symbol of ‘Purity’, ‘Beauty’, ‘Character’, ‘Sacrifice’ ‘Love’ ,’Chastity’ and ‘Unparalleled Devotion’. Shri Ram married Sita Mata after he won her hand at her ‘Swayamvar’ where he lifted and broke the ‘Shiv Dhanush’ with ease which was one of the conditions for anyone to marry Sitaji. She accompanied Shri Ram and Laxmanji in their 14 years exile from the kingdom of Ayodhya. She remained steadfast in her devotion and dedication towards Shri Ram even while staying as a captive in Raavan’s palace. She gave birth to two sons, twins Luv and Kush who set a fine example as brave, valorous sons and able kings just like their father Shri Ram.

Laxmanji sets a fine example of the ideal and devoted younger brother. He is an incarnation of Adisesha of Bhagwaan Vishnu and is the eldest son of Maharani Sumitra, the youngest Queen of King Dashrath. And hence he is always by Shri Ram’s side. Laxmanji is married to Sitaji’s younger sister Urmila. Laxmanji accompanies Shri Ram and Sita Mata on their 14 year exile to the forests after Queen Kaikeyi forces King Dashrath to grant her two boons that he had promised to fulfill as she wanted her own son Bharat to ascend the throne and become the King of Ayodhya in place of Shri Ram. Laxmanji accompanies Shri Ram in his search for Sitaji and helps him in fighting a battle against Raavan. Laxmanji gets injured and is fighting for life when Hanumaanji searches for the magical herb’ Sanjeevani’ and lifts the entire Gandhamardhan Mountain and brings it to Lanka to revive him. It is said that Shri Laxman did not sleep at all for the entire period of 14 years that he was with Shri Ram and Mata Sita.